WHEN Marie Yates was touring the country talking about her book Reggie and Me she found people gravitated to her rescue Rottweiler German Shepherd cross Reggie.

It sparked a lightbulb moment that led her to create an incredible social enterprise, Canine Perspective CIC, where she works with rescue dogs and survivors of sexual violence.

Marie and her team of canine companions have helped people across the UK and in this podcast episode she shares how dogs help people recover, build resilience and rebuild their lives following terrible events.

Plus how she made her dream of putting on workshops for survivors a reality and the steps she took to make it all come together.

From book tours to qualifying as a dog trainer to meeting a three legged Staffie named Bruno that led her to work with Purina and having her work stopped by lockdown, Marie reveals how she remains resilient.

And what we can all learn from dogs.

Marie’s message is, ‘we all have down days and we all have dark times, but everything can be fabulous.’

You can listen to our raw, honest and inspiring podcast on the player link below or continue reading as a blog post.

Can you tell me about who you are and what you do?

“I’m Marie, and I run a social enterprise called Canine Perspective which is a Community Interest Company. Our original mission is to partner survivors of rape and sexual violence in workshops with rescue dogs.

“We have quite an exciting theory of change when we look at behaviour change in dogs and in humans, looking at the stories of the rescue dogs.

“We look at how that parallels survivors and recovery from trauma and looking towards the future and living our best lives.”

What did you do before you started Canine Perspective?

“I worked in disability sport, then Paralympic sport and finished my sporting life in UK athletics in 2012 after being responsible for the development of the 2021 paralympic programme.

“Then, I worked for the Department of Education which was soul destroying. Whilst I was there, I was also volunteering with survivors and young people in particular.

“And I found myself getting quite grumpy sometimes about the stories that I heard and some of the language that was used about what life would be like as a survivor.

“That it would be a lifelong journey of recovery, and that life was going to be impossible, and I wanted to write something that challenged that belief and showed that life could be wonderful.

“So I wrote a book aimed at teenage survivors of sexual violence. I was offered redundancy and leapt at the opportunity.

“At the same time I was offered a publishing deal on my book – it was like it was written in the stars! Then I started Canine Perspective, and the rest is history!”

Can you tell me about the book?

“I wanted to write about a teenage character with something positive for survivors.

“Because of my experience as a survivor, growing up and becoming an adult I feel like I’ve had a lot of choices,

“I was trying to write and I was sat there surrounded by hundreds of screwed up bits of paper, and under my desk was my own rescue dog.

“The more I thought about it, the more I realised he paralleled many of my experiences. He was a rescue dog, and Rottweiler German Shepherd cross.

“And it was quite a long time ago that I adopted him. Rottweilers back then were what Staffies are now. They had a bad reputation which we know is nonsense, but it was there.

“I was told that I shouldn’t have him, that was a big mistake, that he’d hurt me, he’d hurt other people. And it was so far from the truth, just ridiculous.

“It was a judgement based on a label, and it was very similar to when you disclose that you’re a survivor. People expect you to behave in a certain way.

“There’s an expectation that you’ll be frightened or sad or unhappy. And that life is difficult because they’re the messages that shine through.

“Similarly with my boy, they weren’t seeing him or how he was behaving, they were just recomputing that message. So the book was born out of that.

“It’s a story of a teenage survivor and her rescue dog, who also happens to be a Reggie, German Shepherd, Rottweiler cross, and we explore all of these different ideas and parallels.”

Marie and her inspiration, Reggie

“Yes, so it meant I was able to go on tour. I took Reggie and no-one was interested in me, he was the main event. And he was absolutely phenomenal.

“We would meet with survivors and he knew who to go to, what to do, when to sit back, when to go to somebody, when to sort of rest his head on them.

“And bear in mind, you know, he’s a big lad. The presence he had, the way he was able to communicate and the power he had was amazing.

“A lot of the people we were working with, they’d never had safe touch with anyone.

“But they were able to sit with him, touch him safely and have that connection in a whole new way. And I knew there was something in it.”

“I took myself off and trained as a dog trainer and took my dog behaviour qualifications so I could understand more about what he was doing and how he was doing it.

“My dog training taught me more about the parallels of survivors and the troubling behaviour in rescue dogs.

“This was the start of Canine Perspective as the first part of what we do with our work is a behaviour change programme for dogs through Canine Hope.”

How did Canine Hope develop?

“We started to work with genuine rescue dogs, and that’s where we came across Bruno who was a three legged Staffie.

“He was taken from his family by police and it was a terrible situation. He had a significant injury to one of his back legs. The police took him to the vet and they amputated straight away.

“We met him after he’d been medically signed off by the vet and he was moving around fabulously on his three legs. Since then he’s been a big part of the Canine Hope sessions – it’s like he’s made for the job.

“Staffies have a bad reputation but Bruno shows that labels are just labels, he had been physically and mentally abused and neglected and never once bit anyone, he never tried to run away or even alert anyone.

“There were no complaints of barking from the neighbours in the house. He could have caused serious damage to his abusers but he didn’t.

“So when they look at Bruno the power of the feeling comes with that, they realise it couldn’t be his fault he was abused just like it wasn’t their fault.” 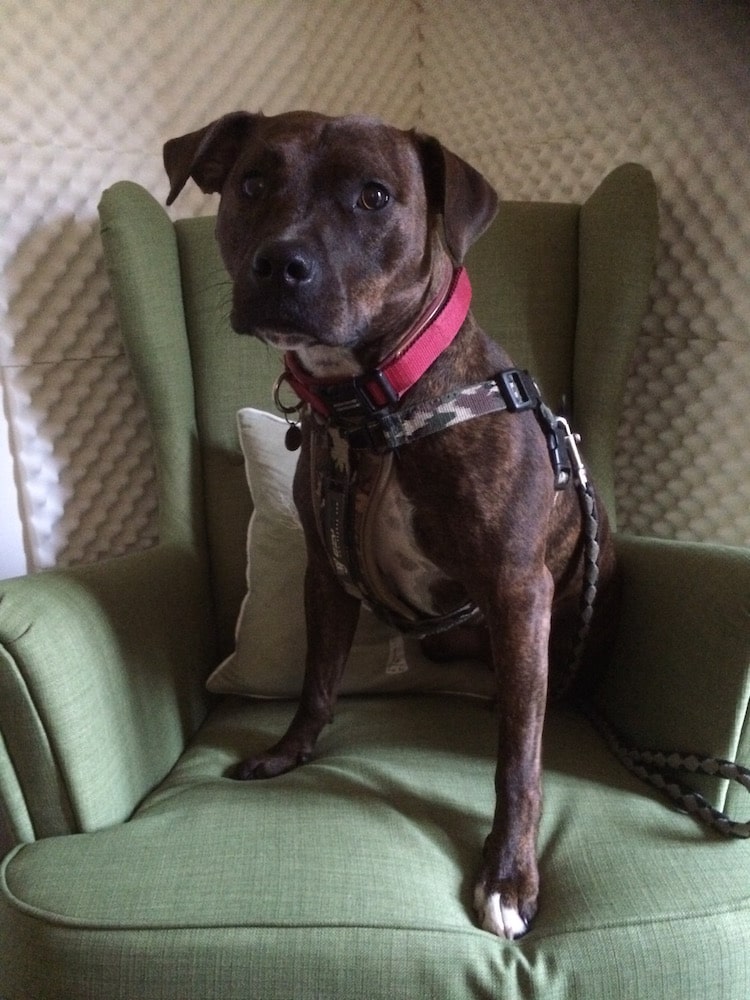 Bruno, one of Marie’s canine co-workers

How does Canine Perspective work?

“We tell the stories through the dogs because it enables us as humans to learn in a different way. People share things but it’s not about sharing their personal experiences.

“The biggest misconception is that it’s challenging and emotional, but it’s also so fun and uplifting. The subject matter can be challenging but we work with it in a light hearted way.

“We look at how the brain responds to trauma, the science behind it and this helps to take away the blame.

“We use the dogs to explain it from their point of view, so we might say, ‘How did Bruno respond?’ and we look at the parallel and steps towards what people want to achieve and how their behaviour can change.

“We had a woman in her 80s in one session, she had never touched another human being safely since being abused in her childhood and abused by her husband and she had no friends because of the isolation he created.

“When he died, she came to a workshop with a charity I was working with and Bruno was the first soul she touched safely.

“Fast forward to now and she’s volunteering to help other people who have suffered abuse – she says it’s all because of Bruno.”

What’s next for Canine Perspective?

“We’ve had an enforced stop because of lockdown which has led to some intense rethinking.

“Moving forward, Canine Hope will be back and as soon as we are allowed, we will deliver through charities and with the support of experts.

“We’ll also be looking at resilience training, similar to trauma recovery, to help people make changes in their life.

“I live by the Gandhi quote, ‘The greatness of our nation, and its moral progress can be judged by the way that animals are treated.’

“We are going to bring everything together to create representative leaders and help to empower people to change their brains and their behaviour in the same way we work with the dogs.

“We also have our mascot Luna and merchandise products coming out, and a podcast and children’s books.”

What can we learn from our dogs, particularly with all that has happened in the last 18 months?

“And when we look at, so for us, it’s rescue dogs, when they’ve experienced a trauma, they don’t just learn to trust again, they trust themselves as well.

“But with the understanding that sometimes there will be days where they maybe have some of those traumas retriggered. And I think that’s what we’re experiencing at the moment.

What did you learn from lockdown?

“That you’ve never cracked it! That’s for sure. It’s a constant practise for me, resilience isn’t about bouncing back, it’s about having the skills to bounce back.

“And sometimes in order to bounce back you have to accept that you have to pause and stop, this was hard for me – especially because we didn’t choose to stop.

“It’s having the courage to take steps and accept it may not work, but you’re going to try anyway.”

Find out more about Marie and her work at Canine Perspective on her website: www.canine-perspective.com

You can read an interview I did with Marie following her Better With Pets prize here.

If you enjoy reading about people who do extraordinary things to make our lives Better With Pets, you might enjoy this podcast with Jade Statt from StreetVet, my interview with Carla Finzel about her work creating District Vet Nurses or Hannah Capon talking about her mission to help dogs with arthritis. 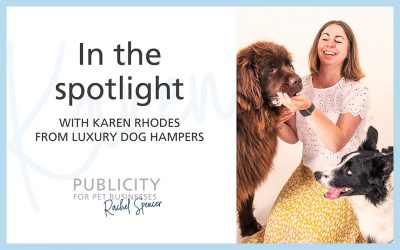 In the spotlight with Karen Rhodes from Luxury Dog Hampers

Would you love to know what it’s like to go from being a successful pet service provider to launching a product business? And having a lightbulb moment while watching TV then turning your idea into a hugely successful brand? Karen Rhodes, founder of Luxury Dog... 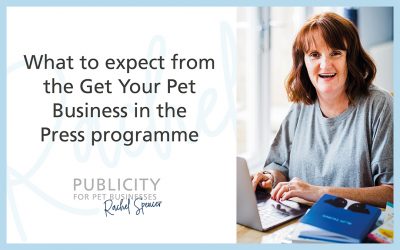 Would you love to raise the profile of your pet business by being featured in the media? If so, taking part in the 12 week Get Your Pet Business in the Press programme will give you everything you need to find stories in your pet business and share them with... 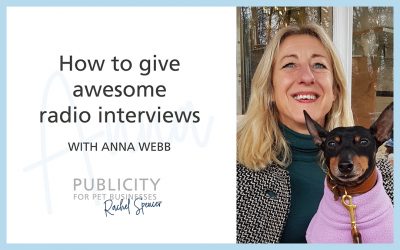 How to give awesome radio interviews with Anna Webb

Is getting on the radio one of your PR goals for your pet business? Being interviewed live is fantastic for giving people an insight into you as a pet professional but can be daunting too. Anna Webb is a seasoned BBC Radio presenter and a regular guest on shows like...